You can read the latest Amilcar Australia newsletter – here

For years there has been a mysterious tail light fitted to mainly Australian Amilcars. A neat small square light with a nice round lens, once was thought to be an Australian trade item. Many disagreed with this “theory” (which was insisted upon by the UK Amilcarists – and they couldn’t be more further from the truth!). However, it was brought to the attention that the threads for the globe were in fact metric a few years ago which certainly went to dis-prove the theory that this light was an Australian trade item – Australia was thoroughly involved in the imperial system and only went to metric in the late 60’s. 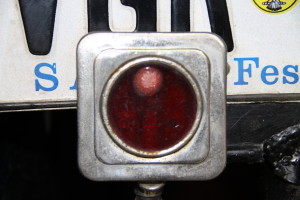 A few weeks ago a bombshell dropped like no other in the history of Australian Amilcars. I happened to be on ebay France, when a suggested item popped up in front of me. I nearly fell off my chair (as you could imagine) when I saw what looked to be an Amilcar tail light in a lot of new old stock lights. A bidding frenzy followed and after keeping it close to my chest for three days – it was mine. It arrived a week later and confirmed that this light is the same as fitted to our CGSs and in fact was new old stock and had never been fitted to a car!

So the myth is now busted – this small no name tail light (most likely a trade item) is in fact French and was most likely made for many years after the Amilcar factory ceased. I consider it a complete fluke that I stumbled across this, but it goes to show, you never know what you might find!

We are developing this site for the Amilcar community in Australia. We aim to make it informative and hope to be able to keep you up to date with news, information and events.

Onboard at the Adelaide Motorsport Festival